Capacity limits aside, Baton Rouge’s mayoral candidates are, for the most part, still holding election night parties as usual, renting out spaces in local hotels and restaurants for supporters to watch results pour in on live television.

The two Democrats in the race—incumbent Mayor Sharon Weston Broome and state Rep. C. Denise Marcelle—have both reserved spaces at hotels for their election night parties. Broome has reserved a room at The Embassy Suites by Hilton on Constitution Avenue, according to campaign manager Richard Carbo, while Marcelle has rented out the Baton Rouge Marriott on Hilton Avenue.

Interestingly, most of the Republicans in the running have opted for restaurants.

E Eric Guirard, a personal injury attorney, is having a watch party at The Station Sports Bar and Grill on Bennington Avenue, which is owned by a couple of his supporters.

“We already have a tab set up there,” Guirard says of the event, which begins around 8 p.m. “There will be an open bar and food. We’re expecting 50-ish people.”

Meanwhile, Republican candidate and Metro Council member Matt Watson will be at Portobello’s in the Bocage Village shopping center on Old Hammond Highway.

“I don’t know how many people will come,” Watson says. “We’re trying to keep it under capacity limits, but we’ll have some overflow space.”

Jordan Piazza, who owns Uncle Earl’s bar in the Southdowns Village Shopping Center, will end his night there with a party after grabbing dinner with family and close friends at Gino’s.

Only one candidate, former state Rep. Steve Carter, is avoiding an outside venue and is instead hosting a small gathering for his campaign team at his family home in Bocage Lake.

“It’s going to be a low-key evening,” says Carter’s campaign manager, Cade Tolar. “We’re playing it safe out of an abundance of caution.”

Candidate Frank Smith III could not be reached for comment prior to publication.

Roundup: No ITEP this month / Shipping limits / US hiring 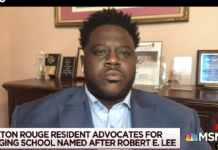 Chambers looks to crowdfunding as he mulls congressional run