I learned something remarkably interesting yesterday.

When I called the FSA (Florida Stormwater Association) to confirm my facts about money coming into Miami’s stormwater program, the folks over there had their now-retired founder, Kurt Spitzer, call me. I wanted to know why FSA began.

But there was an unintended consequence of Spitzer’s creation.

When communities suddenly had money to begin the programs that would buy the equipment that catches “floatables” that impair a watershed, the unintended consequence was that, unbeknownst to them, they were preventing flooding! Yes. Stormwater programs began as an effort to comply with the Clean Water Act, but the money coming in served to build out the infrastructure that would keep flooding down too. They unknowingly killed two birds using one stone.

Over thirty years ago they unintentionally did what we need to do today: fund a program that prevents flooding and at the same time intercepts the floatables that impair a watershed and make it embarrassing to live here.

It makes you wonder what the 2016 flood would have looked like had we done what they did decades ago.

In the case of the city of Miami, their stormwater program brings in 12 million a year with an average assessment on impervious surfaces of $3.30 per month.

Miami is not only able to capture flood causing litter, sediments and decaying organics on the front end before they contribute to a flood, or cause a lake to have to be dredged, but they have the funds to clean out canals, hire trained stormwater workers and experts, build out new infrastructures, and educate the public about how to keep floatables out of the watershed and their food and water supply safe.

While other cities roll in millions of dollars to solve flooding and littering issues in one fully funded program, Baton Rouge has 250 canals and we struggle to empty the 3 booms on Carlotta, Roosevelt, and over by LSU.

When I went to the city last year and told them Pam Wall and I had found the money for 3 booms to be purchased and installed for Capitol Lake, we needed the city to commit to emptying them. They told me they couldn’t afford it. I figured the price tag to empty the booms would be under $10,000 at $15/hour because we have 41 bags flowing into Capitol Lake every month and it takes well under an hour to fill one bag of litter out of a boom.  In fact, when the density of litter is high, like it would be in a boom, our volunteers fill one bag every 15 minutes using a litter stick.

We turned to the Baton Rouge Area Foundation for help and the booms should be installed soon.

Please do not point fingers because our fathers and grandfather’s contributed to this problem by not being visionary. We not only pick up this generations litter at Capitol Lake, we are picking up litter from the late 1950s.

This is our moment to fix this. It has wonderfully fallen upon us. It is easy to fix, but not cheap.  But losing everything you own in an unexpected flood in not cheap either. And it will not be cheap to dredge out two permanent islands that formed over the last ten years in Capitol Lake.

I would like to add that some cities put “hardship credits” on the utility bill to help their vulnerable with the monthly cost.

Marie Constantin is an internationally renowned photographer and author known for her photographs of the late Mother Teresa of Calcutta. Over the past year Constantin single-handedly launched a citizen campaign to clean up the litter that flows from drainage canals into Baton Rouge area creeks, bayous and beyond.

Alford: Issues put on hold for COVID-19 begin to resurface

Riegel: The cost of Baton Rouge ignoring its stormwater problems

Alford: Will DC distractions slow down coronavirus relief for states? 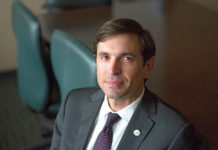