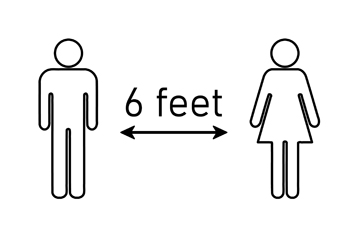 While the COVID-19 pandemic has wreaked havoc on the local and national economies, some businesses are finding new markets and opportunities during the crisis.

Take Baton Rouge-based Enginuity Global. The nearly 3-year-old industrial services company derives most of its revenues by developing custom software for plants and manufacturers to help them run their systems more efficiently.

Since the pandemic, however, it has begun selling a wearable device that makes social distancing more easy and effective.

The Bluetooth device, called a Halo, is intended for use on large job sites and notifies wearers  if they’re within 6 feet of someone else wearing a Halo, so they can spread out.

Perhaps more importantly, the device—a black wristband—stores GPS data on who a wearer has been in contact with, which can be used for future contact tracing if the wearer is later diagnosed with COVID-19.

“The idea is for an organization to buy 100 bands and you check out, say, band number seven and it registers you wore that band for that day,” Tiemann says. “Then, if you test positive two days later, they pull the GPS data for band seven and see who you came in contact with—say, bands 10, 12 and 15— then they let those wearers know they were potentially exposed.”

For large companies and institutions, the idea is to prevent the need to shut down an entire operation every time someone tests positive for the virus.

“They can quarantine or shut down just a portion of their operation, not the entire thing, because they have the data they need to know who is potentially infected,”  Tiemann says.

Enginuity Global did not design the Halo, nor does it manufacture the device. Rather, the wearable is the brainchild of Canadian company Proxxi. Enginuity Global was already carrying an iteration of the Proxxi Halo before the pandemic, selling it to clients with high-risk energy sources. In that context, the Halo acted as a worker safety device that notified wearers if they were standing too close to something like a high-voltage panel or open flame.

Once the pandemic hit, Proxxi pivoted and modified the Halo so it can be used to detect the presence of another person just as it could a dangerous energy source.

So far, Enginuity Global has sold about 1,000 of the devices, though has potential orders for more than 50,000 in the pipeline. Overall, Halo sales represent just a tiny fraction of Enginuity Global’s total revenues.

But as the pandemic lingers, interest is continuing to grow, and the firm has the exclusive distribution rights to sell the device throughout the Gulf South.

“We’ve had some requests from some local schools, financial services companies, it’s really been a mixed bag,” Tiemann says. “It appeals to a wide variety of organizations.”