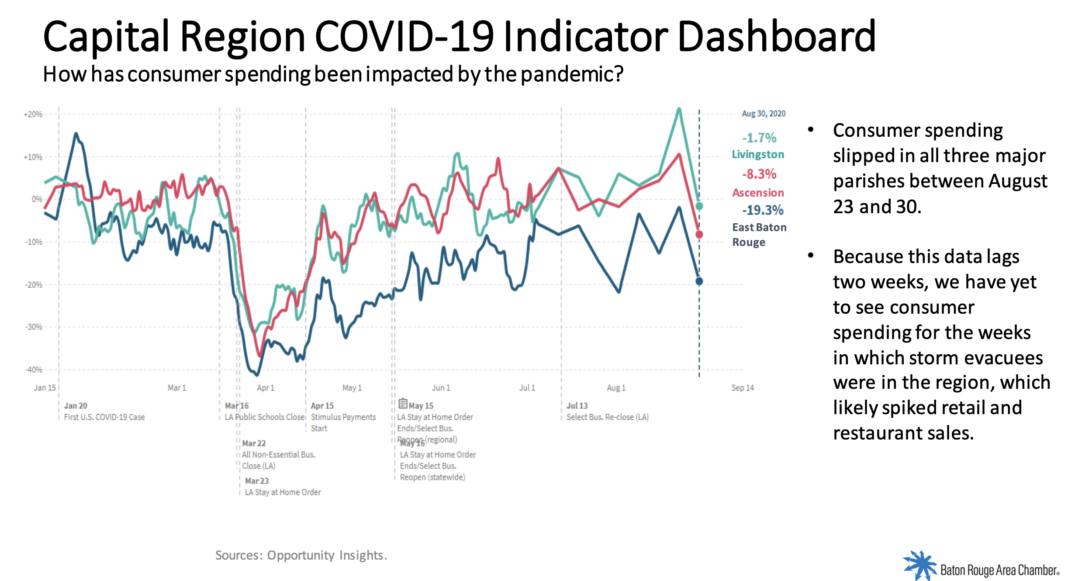 Once an influx of spending from hurricane evacuees subsides, local businesses will get a better idea of what phase three means for them, based on the findings of the Baton Rouge Area Chamber’s latest COVID-19 economic indicator dashboard.

“While it is unclear whether the state’s move to Phase III of recovery will meaningfully affect employment, business openings or consumer behavior, the Capital Region has seen positive economic trends from hosting hurricane-impacted residents from other parts of the state,” says Andrew Fitzgerald, BRAC’s senior director of business intelligence, in a prepared statement.

For instance, hotel occupancy spiked in the week ending Sept. 5 to 92% due to Laura evacuees staying in the region and as recovery efforts continue. Meanwhile, retail fuel sales continue to trend higher than a similar week last year at both the state and regional level.

However, businesses’ phase three recovery will largely depend on two factors: 1) whether there’s another federal aid package to assist businesses and displaced workers, and 2) how quickly state guidelines allow businesses currently closed or operating at limited capacity—such as restaurants and bars—to reopen.

In the meantime, BRAC points to key findings from this week’s dashboard, including:

• Weekly unemployment claims fell for the seventh consecutive week—a 30% drop in total claims over that time.

• Consumer spending dipped considerably in the last week of August, but that doesn’t account for expected higher spending due to the influx of evacuees from southwest Louisiana.

• Mobility was mostly static, although park attendance was up in several parishes.

• CATS continues to have about 50% of the weekly ridership it had last year.

While initial unemployment claims rose slightly over the week, there is little to indicate that renewed federal unemployment benefits, which expire this week, have affected the number of claims in the region. There were 40,838 combined weekly claims in the week ending Sept. 5, still roughly 16 times that of a normal, pre-pandemic week.