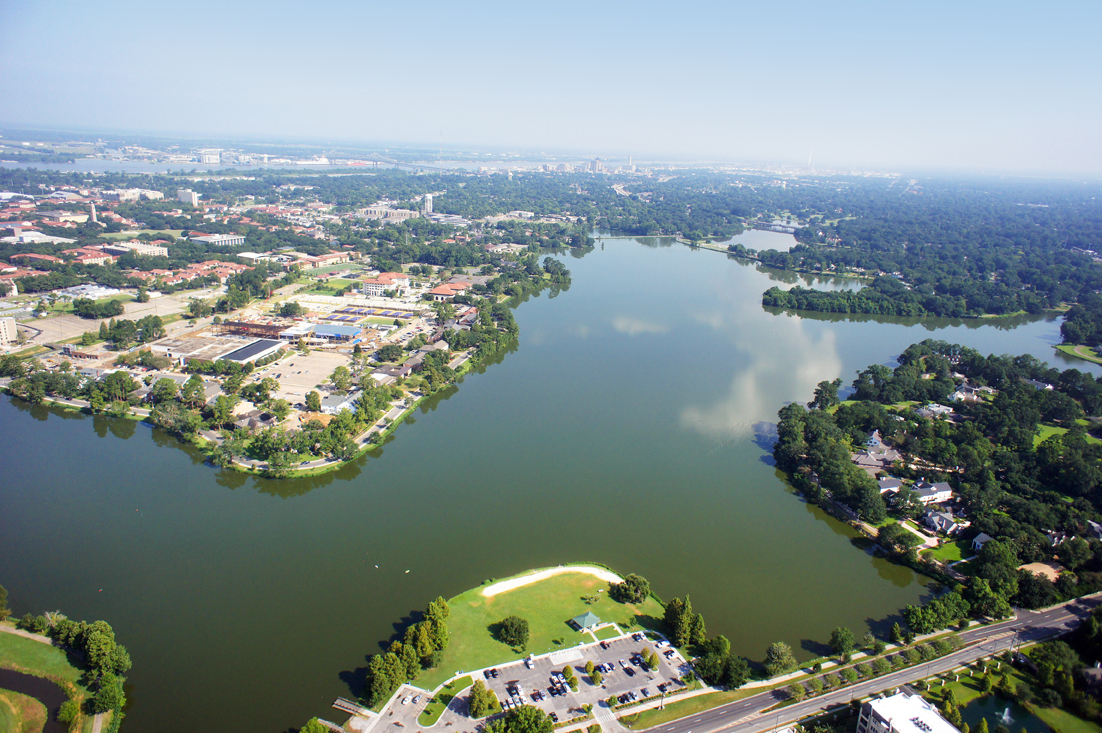 Imagine a day spent kayaking on the lakes from LSU to City Park, or cycling around them on a dedicated path, or tracking migratory birds from spacious green spaces protected from traffic. The first phase of a forthcoming $50 million, multi-year revitalization coordinated by state and local governments, BREC and LSU should come in the next few months. The project will begin in fall 2021 with dredging to make the water bodies deeper and healthier. The effort is being compared to Houston’s once-neglected Buffalo Bayou, now an award-winning park.

January 2010: “Until the city, LSU and BREC can come to terms with how the cost will be shared, how they are going to come up with that, we cannot move forward.” — Nick Sims, project manager with the Army Corps of Engineers, had said improving the lakes would cost $7 million in 2008. That ballooned to $21 million in 2010—and $50 million in 2020.

Greater Baton Rouge’s traffic woes are the stuff of legend, especially for commuters. How we continue to chip away at them will depend, to some extent, on who wins the race for mayor. Meanwhile, DOTD is in the first stage of a plan to widen Interstate-10 from the Mississippi River bridge to the I-10/I-12 split. The plan includes new east- and westbound travel lanes, new on- and off-ramps, and lane additions to the eastbound side of the Mississippi River Bridge to smooth the incoming flow of traffic into Baton Rouge.

DIGIT — 348: The number of articles on 225batonrouge.com that have mentioned the word “traffic” over the last 15 years.

Last fall, residents of a southeast portion of Baton Rouge voted to break away and form the city of St. George, citing motivation to establish an independent school district. What the future holds is still unclear—but plenty contentious. Mayor Sharon Weston Broome filed a lawsuit to stop the incorporation, but if St. George clears that hurdle, Baton Rouge will have to square significant lost tax revenue, and St. George will have to build—and pay for—a school system and local government from the ground up.

The new Plank Road Master Plan aims long-awaited development energy at this long neglected critical corridor where high crime and disinvestment have been the norm. In 2021, the Build Baton Rouge-led project should break ground on a pocket park and an $8 million mixed-use development that features affordable housing and an Early Start Child Care Center. A forthcoming Bus Rapid Transit line planned by CATS will be built in the next few years. It links Plank Road to Nicholson Drive.

For decades, cities like Houston, Atlanta, Austin and Nashville have lured local college graduates with hot job opportunities and quality-of-life amenities. Projects like the Electric Depot and a host of new bars and restaurants have beefed up Baton Rouge’s cool factor, but a new strategy in the business community may also help keep 20-somethings in town. BRAC is encouraging local businesses to build relationships with students earlier, through both paid internships and job postings on the talent recruiting platform Handshake. No doubt we’ll see local businesses step up their efforts to partner with regional higher ed institutions.

November 2015: ‘‘We need to make sure we nurture talent.” — Musician and teacher John Gray, when asked how we keep young musicians in the state

Distillers began making hand sanitizer. Home delivery became even more popular. Restaurants added outdoor dining without a city ordinance. Business went virtual. Handshakes were no more. Unemployment rose. So did food insecurity and cases of domestic violence. By early October, the state had seen nearly 170,000 cases and more than 5,400 deaths. It’s anyone’s guess what the next few months will bring, but there’s a good chance we’ll see some of the pandemic’s trappings for a while, even with a vaccine.

We used to love a good rain storm. But after 2016, steady rainfall sends shudders about where all that water goes—and whether local rivers and bayous can absorb it. Sustainable development may finally be getting its due, with good examples for green infrastructure set by the Baton Rouge-based Center for Planning Excellence. Meanwhile, BREC is finding new ways of helping parks absorb water. In addition, we’ll likely see watersheds encouraged to flow and carry water, rather than being covered with concrete.

DIGIT — 7.1 trillion: Gallons of water dumped on Louisiana during the August 2016 flood—three times as much rain as Hurricane Katrina and enough to fill Lake Pontchartrain four times, according to The Washington Post.

Lately, the East Baton Rouge Parish School System has been focused on safely reopening during the pandemic. But its future holds much larger issues concerning equity and performance. Improving the C-rated system will be the focus of the next superintendent. Meanwhile, Baton Rouge continues to excel at attracting high-performing charter school models, including Basis and IDEA, adding to a growing list of choices for families.

For years, we’ve known about saltwater slowly creeping into the main aquifer that supplies Baton Rouge with drinking water, but have yet to pinpoint a solution. Recently, the Water Institute of the Gulf got involved, teaming with LSU scientist Frank Tsai and the Capital Area Groundwater Conservation Commission. The Water Institute is working on a study for a 50-year solution.

December 2013: “The way we’re going, people are going to be forced to drink from the Mississippi River. Everybody loses if we don’t act.” — Hays Town, who led the formation of Baton Rouge Citizens to Save Our Water, Inc.

Baton Rouge still has a lot of work to do. We are a city, after all, whose school system functioned under a federal desegregation order for 51 years, where Black and white residents are divided geographically, and where the pandemic is impacting a disproportionate number of African Americans. The good news? More police officers now wear body cams. Organizations like Dialogue on Race Louisiana continue to bring diversity training to groups. And student-run, peaceful protests in Baton Rouge after a Minnesota policeman killed George Floyd in late May demonstrate a racially diverse commitment to improving race relations. 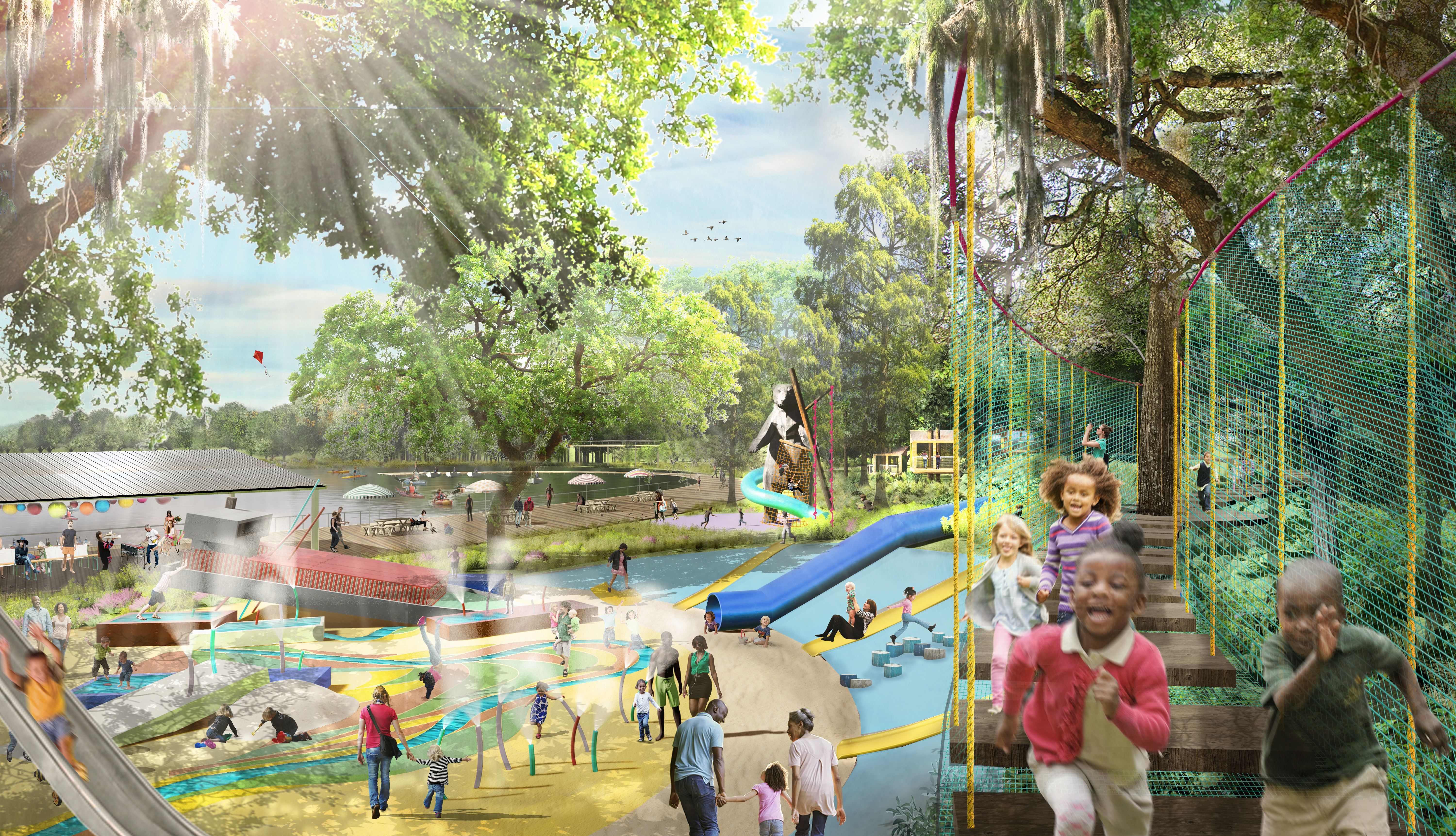 With the heated discussion about whether to renovate or relocate the Baton Rouge Zoo finally settled, the focus turned this year to finishing a master plan to improve the current zoo and to create a coherent connection to the adjacent Greenwood Park. Phase One construction starts shortly. The project may take a decade or more to complete. But among the finished amenities you’ll eventually see are a new visitor’s entrance and orientation center, underwater hippo exhibit, and a zipline through the surrounding park. 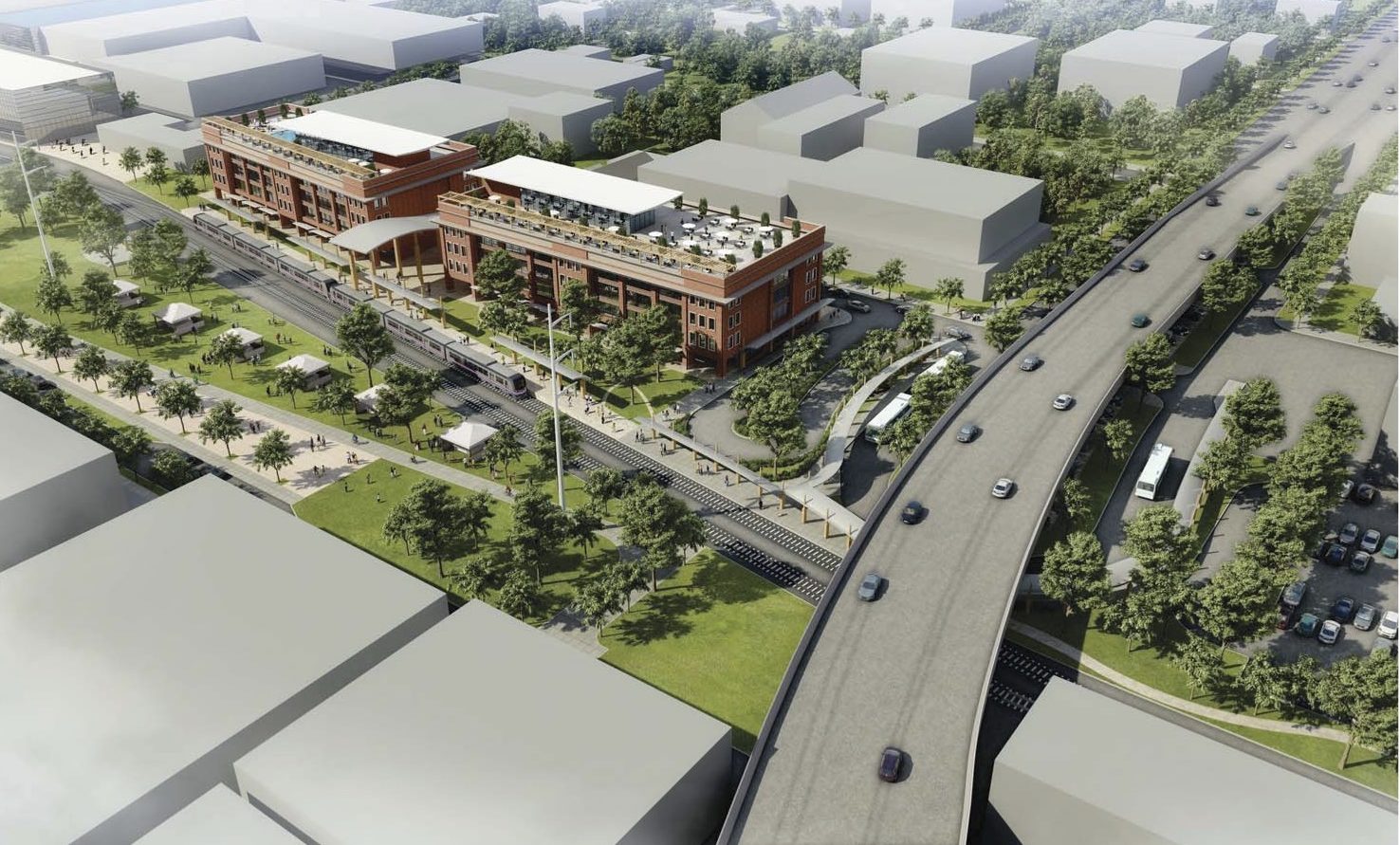 Linking Baton Rouge to New Orleans is a heavily researched idea whose time, many believe, has come. Baton Rouge, Gonzales, LaPlace and New Orleans all have drawn rail station plans—ours would include a station in the Health District and the final stop at Government and 16th streets—and many see the rail as a way to coalesce economic development in a super region. A large portion of funding will need to come from the federal government, ultimately requiring political will at the state level. Time will tell.

Discussions of another bridge constructed somewhere to the south have been ongoing. DOTD is studying the issue, but it’ll be years before it’s completed. The bridge could be built at one of five sites between Brusly and Plaquemine, thus linking La. 1 to La. 30. 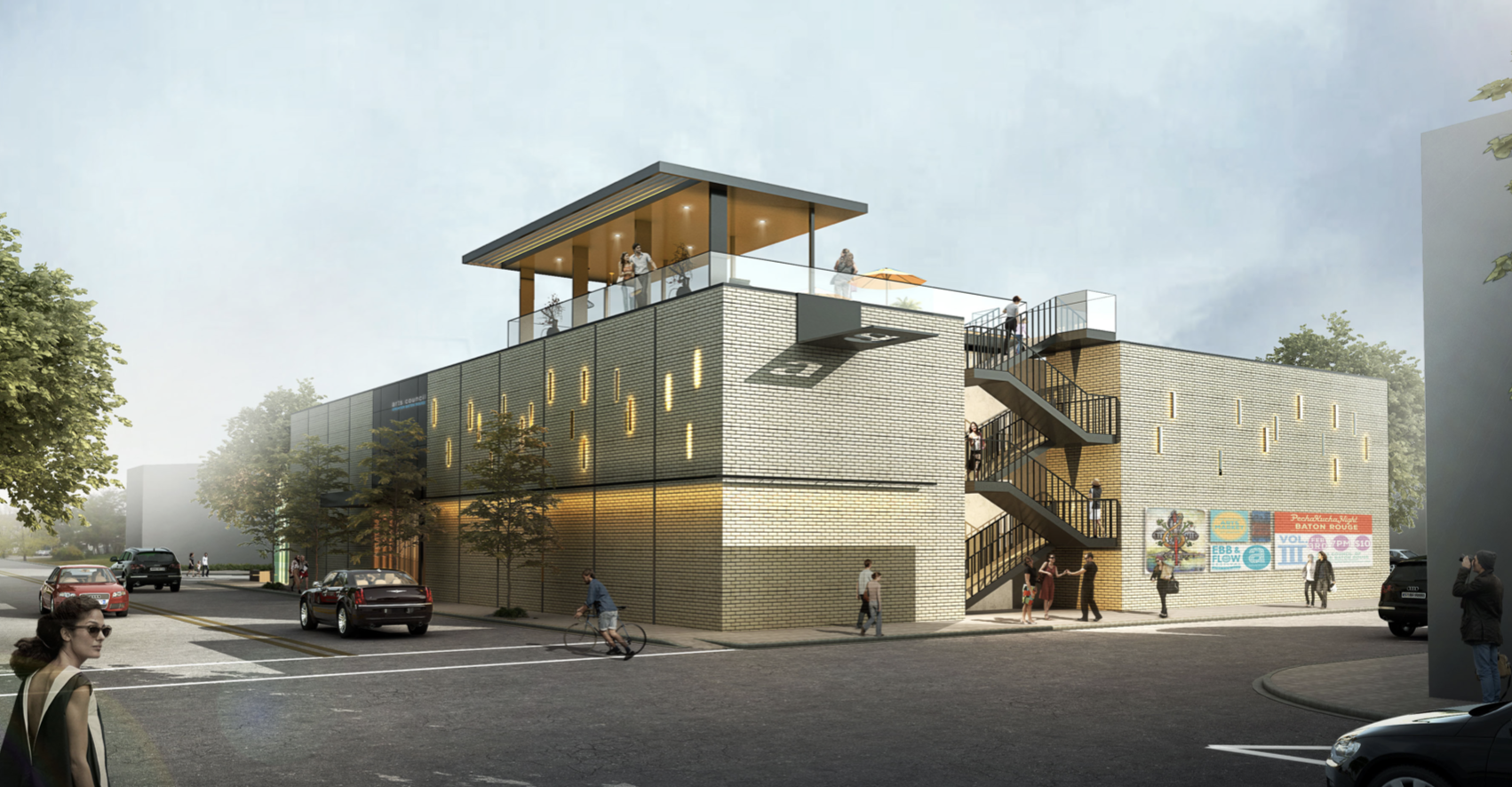 As COVID-19 restrictions lift, the last sector to return to normal will be the arts. When that happens, be sure to show your support by seeing a show or exhibit. It’ll take the next few years for arts organizations to bounce back from their extended shutdown. In the good news department, the city looks forward to the opening of the Cary Saurage Community Arts Center in Beauregard Town in August 2021. Set in the historic Triangle Building, the Arts Council’s facility will be a true community gathering spot with gallery and rehearsal space, studios for working artists, meeting rooms and arts offices.

Click here read more of Baton Rouge’s biggest moments of the past 15 years and a look at what’s to come.

This article was originally published in the November 2020 issue of 225 Magazine.