Two years have passed since the #MeToo movement took hold, bringing awareness to sexual harassment women face, especially in the workplace. But since then, have working relationships between men and women changed for the better?

It’s a tricky question. In some ways, yes. In other ways, not so much. In fact, research suggests the movement may have had an unintended effect of pushing men away.

In early 2019, a LeanIn.Org and SurveyMonkey poll found 60% of male managers are uncomfortable participating in common workplace activities with a woman, such as mentoring, working alone or socializing. That’s a 32% increase from one year ago. 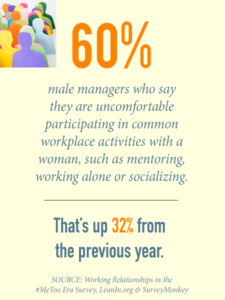 Men, it appears, want to avoid anything that could be seen as inappropriate, which might be because they aren’t totally sure where the line is drawn. Most understand clear-cut sexual harassment and misconduct is wrong—of course—but there’s more nuance when it comes to less obvious situations.

A local women’s networking group met in August to tackle this issue. What they found is the lines often vary among women, as well, and perhaps the best way to address what is and is not acceptable is to have honest conversations and help each other navigate the waters.

Michelet, director of human resources at local tech firm Sparkhound, noted the threshold of what’s acceptable can vary by age, culture, industry and individual. As a woman in her 50s, she knows older generations have often put up with more than most younger women today would accept.

“I know what I’ve had to put up with so does that mean those who’ve been through this, our tolerance is higher?” Michelet asks. “It’s a great conversation to have because those things are happening and we have different levels of generations in the workforce.”

So if boundaries of what’s acceptable and what’s not are blurred, even among women, how are men supposed to know where the lines are?

Again, The Alliance speakers stressed the issue isn’t with obvious cases of sexual harassment—which is very much a problem everyone should agree on—but it’s with the gestures that could be interpreted in different ways, such as a hug, a joke or being left out of social outings.

In discussing their own interpretations of what is and is not acceptable, the women’s group came to some conclusions as to how they can clear up confusion and move the needle of progress forward post #MeToo.

“Conversation, not confrontation,” Michelet says. “While ‘they don’t know any better’ is a horrible excuse, it is in some instances true.”

Also, small wins add up. Some women mentioned how awkward or hard it is to talk to male leadership at work about this, so others suggested starting the conversation instead with male friends and relatives, causing a “ripple effect of positive change,” Michelet says.

Positive reinforcement is another tool the group suggested. If a man at work recognizes something crossed the line and sticks up for you or another woman, Weinnig says, bring it up and thank him.

With any social change, Laperouse says, teaching and questioning behaviors, rather than accusing or confronting, has been proven to bring people together instead of further distancing two groups.

“One small thing we can do is take opportunities to teach instead of scold,” she says. “This is not said in an attempt to continue to put the onus on women to fix this problem that we didn’t create, but to be partners in continuing to move things in a positive direction.”