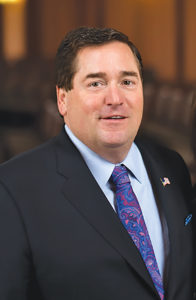 Nungesser, whose office oversees the state’s tourism office, says Louisiana was the first state to have floats in either parade, which was part of an effort to boost tourism in the wake of COVID-19.

“It’s got to be something that gets people excited,” Nungesser told the Baton Rouge Press Club today.

Officials spent $1.3 million for a three-year commitment for the Macy’s parade, starting in 2021. That first year alone, the media value—including the broadcast itself, earned media and website visitation—was $13.7 million, according to Nungesser’s office.

“We got our money back tenfold the first year, with two years lagniappe, on Macy’s,” he says.

The state also put up $325,000 per year for 2022 and 2023 for a slot in the annual Rose Parade. The first year, the estimated value was $26 million. The state used Miles Partnership and the Pollack Group to help determine the ROI, Nungesser’s office says.

Meanwhile, Nungesser says he has commissioned a poll to be taken next month to determine whether he has a path to get elected governor.