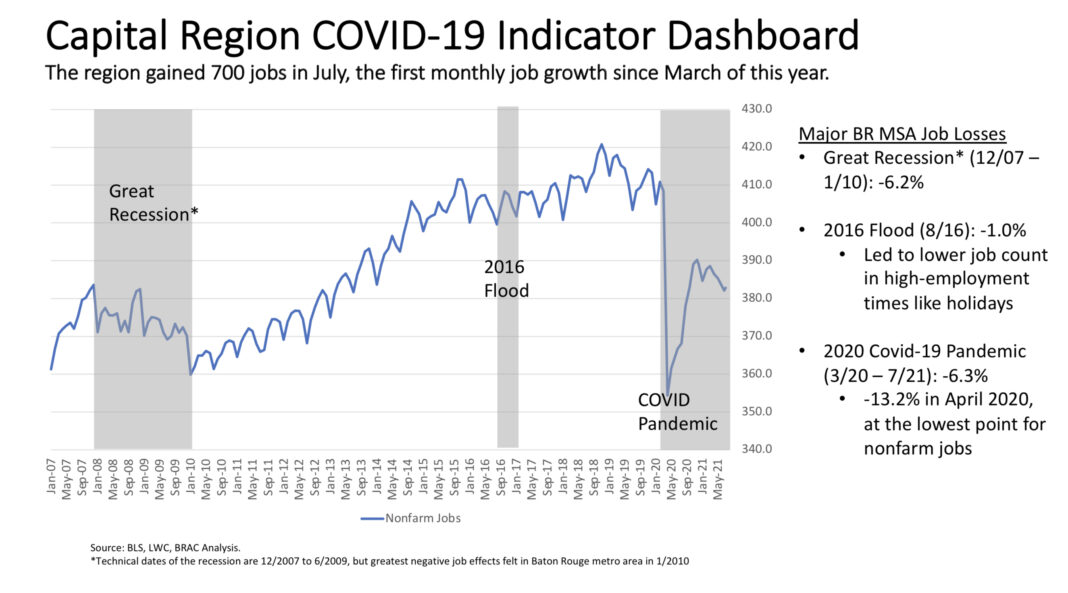 The Baton Rouge area saw continued job growth over the past month, according to the Baton Rouge Area Chamber’s monthly economic indicator dashboard.

The dashboard analyzes the state of the regional economy, and this month’s includes data specifically related to the economic impact of Hurricane Ida on the Capital Region.

“Some of this month’s data—things like mobility public transit ridership—is meaningfully skewed because of Hurricane Ida, so it is important to grasp the large impact it has had on the Baton Rouge economy,” says Andrew Fitzgerald, senior vice president of business intelligence for BRAC, in a prepared statement. “With a number of businesses without power and gas stations without fuel for a full week, next month’s jobs and unemployment numbers may be similarly skewed.”

The Capital Region’s job recovery continues to lag out-of-state peer cities. However, most of those cities are in states that ended enhanced unemployment insurance benefits in June, as opposed to July like Louisiana.

Key findings from this month’s dashboard include:

• Fuel scarcity is a major issue for Baton Rouge, Lafayette, and New Orleans, with only about half of stations having gas on-hand as of the morning of Sept. 8.

• Power is nearly fully restored to Capital Region parishes, as over 90% of customers now have electricity. St. Helena (56.1%) and Livingston (32.9%) still have significant outages.

• While the private sector added 1,900 jobs, 1,200 government jobs were lost, lowering over-the-month job increase to a modest 700 jobs, the first monthly job growth since March of this year.

• Weekly unemployment claims have fallen for seven consecutive weeks. They are down 32.4% since Gov. John Bel Edwards’ announcement in June that he would end the federal enhancement to unemployment benefits early, and almost 25.5% since the start of August, when the enhancement ended in Louisiana. See the dashboard.