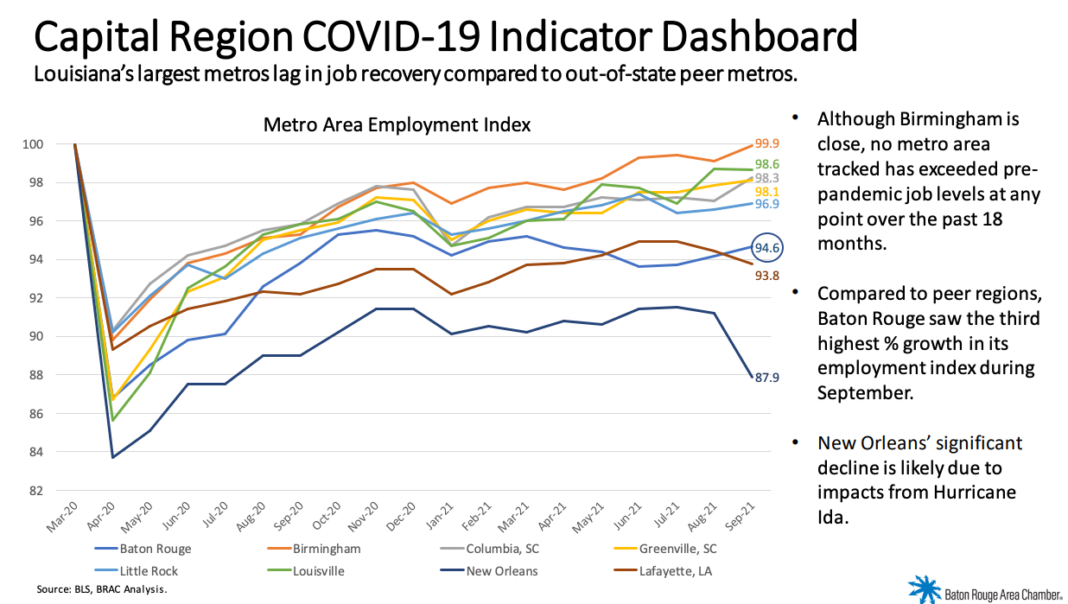 The Baton Rouge metro area is at its lowest unemployment rate, 4.2%, since February 2020, and the region has enjoyed four consecutive months of job growth.

That’s according to the Baton Rouge Area Chamber’s latest economic report analyzing the Capital Region’s recovery from the fallout caused by the coronavirus. Compared to peer regions, Baton Rouge saw the third-highest growth in its employment index during September, adding more than 3,500 jobs in August and September, despite the late summer surge in COVID-19 cases.

“While individual sectors within the economy continue to recover slowly, a number of indicators show significant improvement in the region,” says Andrew Fitzgerald, senior vice president of business intelligence for BRAC, in a prepared statement. “The number of unemployed residents in the region is down to pre-pandemic levels. One big takeaway is that some people have just left the workforce—this could be through retirement, entry into higher education or a training program, or even parents deciding to stay at home rather than participate in the workforce.”

With job openings and wages increasing, it is clear that companies are looking to hire and return the economy to normal—the next task is ensuring the region has the talent available to fill these positions, Fitzgerald says.

Key findings from this month’s BRAC report include:

Vaccine uptake continues to vary significantly among Capital Region parishes, with the rate of new series initiated declining 21% from September to October. The region continues to lag the national average vaccination rate of 67.5%. See the report.